20 Years A King: 2baba Unveils Tboiz, Winners of Next Up Talent Search

2Baba finally unveiled Tboiz – a 3 member boy band to perform at the 20 Years A King Concerts organized to commemorate 2 decades in the music industry as a performer. This announcement was made at the media event held on September 18, 2019, in honor of the 20 Years A King projects.

The members of Tboiz — Okhiria Daabo Ayodele, Oche Peter, and Osaentin Joseph Jonathan were announced as victors of the Next Up talent search which ran from 30th August 2019 to 9th September 2019. Asides the vocalists, Apatira Taiwo Olaseni was also announced the winner of the Next Up video director search.

Next Up Talent Search was adjudged  by 2Baba, songwriter and producer Cobhams Asuquo and video director Unlimited L.A, whilst final winners were selected through an online voting process

During his speech at the 20 Years A King media day, 2Baba had this to say about Next Up: 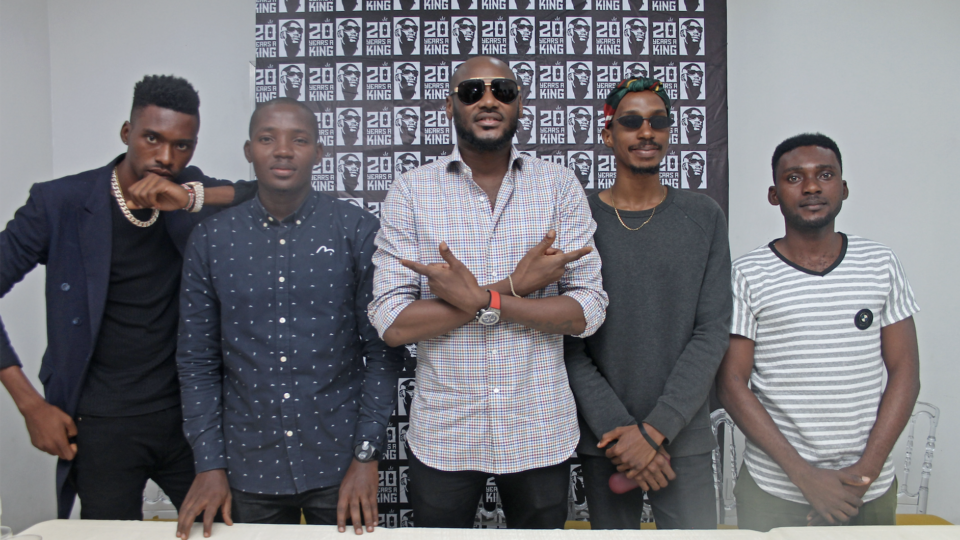 “Next Up is a legacy project. This platform will give these four young kings an opportunity to kick start their careers. Today, they will be performing at the Industry night special and soon, we will be recording a song together. The plan here is to make their voices heard and I am indeed proud to be a part of this project.”

2Baba continues his week of celebration as he marks his 44th birthday alongside ongoing #20YearsAKing activities.

Other activities lined up for the 2Baba week include the Campaign for Peace and Good Governance, a Radio Takeover & Industry Nite Special, as well as the Abuja House Party with Campari, and 2Baba week finale at Rumors Night Club, Festac.

20 Years A King is a celebration of 20 years since 2Baba scored his first hit single ‘Knock Me Off’ as a member of the now-defunct Plantashun Boiz in 1999. Activities, projects and events for the year include a book, a documentary, an album, merchandise, fete, concerts, and parties.

Alphablondy, Redsan, Wyre and Decimators Set to Shut Nairobi Down At The 27th Edition of Koroga Festival

Reactions As Nigerian Youths Protest The Activities Of Bobrisky

Reactions As Nigerian Youths Protest The Activities Of Bobrisky