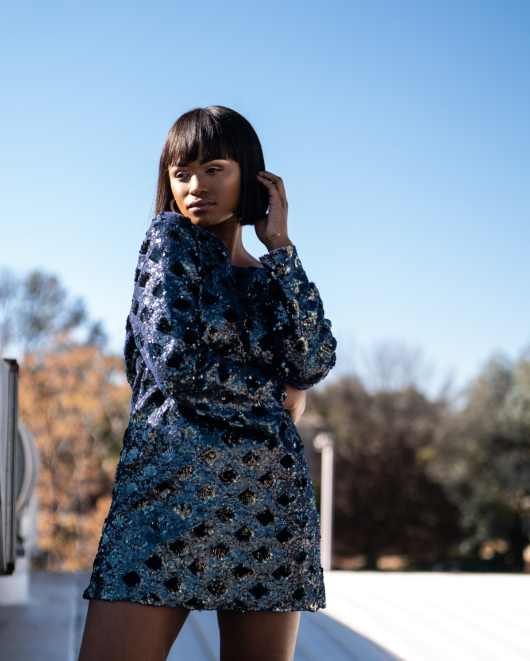 The Face of BET Africa since 2018, will be hosting the international red carpet alongside British-Congolese comedian Eddie Kadi at the 19th annual spectacular awards ceremony that will see big names such as Mary J Blige, Tyler Perry, Regina Hall and local acts rapper AKA and Sho Madjozi in attendance.

For the garment that took a month to create, designer Rich Mnisi said: “The Nomalanga garment is inspired by a precious resource, diamonds, to capture her striking stature and uniqueness. To tell a story of a girl unearthed from the fertile African soil. She is a diamond in the rough perfectly rooted, polished in Africa and exported to the world to marvel at her splendor.”

“I’m happy to have worked with Noma on such a special moment,” added Mnisi.

Shozi, who is currently in Los Angeles since Tuesday, will pair her “mysterious” garment with a pair of stylish Steve Madden heels and will rock hair by The San Hair to complete her look. She will be attending several events at the weekend-long event including concerts and VIP events that will see her rub shoulders with various US and local stars.

This will be Nomalanga Shozi’s third big international career move as she shot content for MTV and MTV Base in 2017 at the MTV European Music Awards and covered the red carpet at the BET Soul Train Awards in 2018. This year, she has gone all out in getting her ultimate dress.

“I can’t wait to reveal this exquisite ensemble by Rich Mnisi, which for now I can define as beautiful, classy and just perfect for the red carpet. All shall be revealed on Sunday for everyone, I am so excited,” concluded Nomalanga Shozi.

Catch Nomalanga Shozi hosting the red carpet alongside British-Congolese comedian Eddie Kadi at the 2019 BET Awards this Monday, 24 June starting from 00:00 CAT with the preview show and main show to happen at 02:00 with repeats at 20:00 CAT same day.

Yvonne Nwosu Says No To Cancer As She Quits Smoking