Patoranking Covers The May Edition Of BlackNBold Magazine

In celebration of the highly anticipated Wilmer album, Nigerian reggae-dancehall singer Patoranking covers the May edition of Uk/Nigerian based black inspired publication, BlackNBold magazine. The edition focuses on his journey, his career and more emphasis on Wilmer, his upcoming album.

Patrick Nnaemeka Okorie better known by his stage name Patoranking started his career doing underground collaborations with artists like Konga, Slam and X project. In 2010 he signed a record deal with K-Solo’s Igberaga Records, releasing “Up in D Club” under the outfit. Patoranking became a protégé of Dem Mama Records after collaborating with Timaya on his song “Alubarika”. In February 2014, he signed a record deal with Foston Musik and released “Girlie O”, a single that gave him the spotlight and in February he signed a distribution deal with VP Records. Since then Patoranking has gone on to release multiple singles and Top hits, including his most recent hit song “confirm” with Davido.

Patoranking chats with BlackNBold magazine about his new album named after his daughter ”Wilmer” and his thoughts on fashion and style. 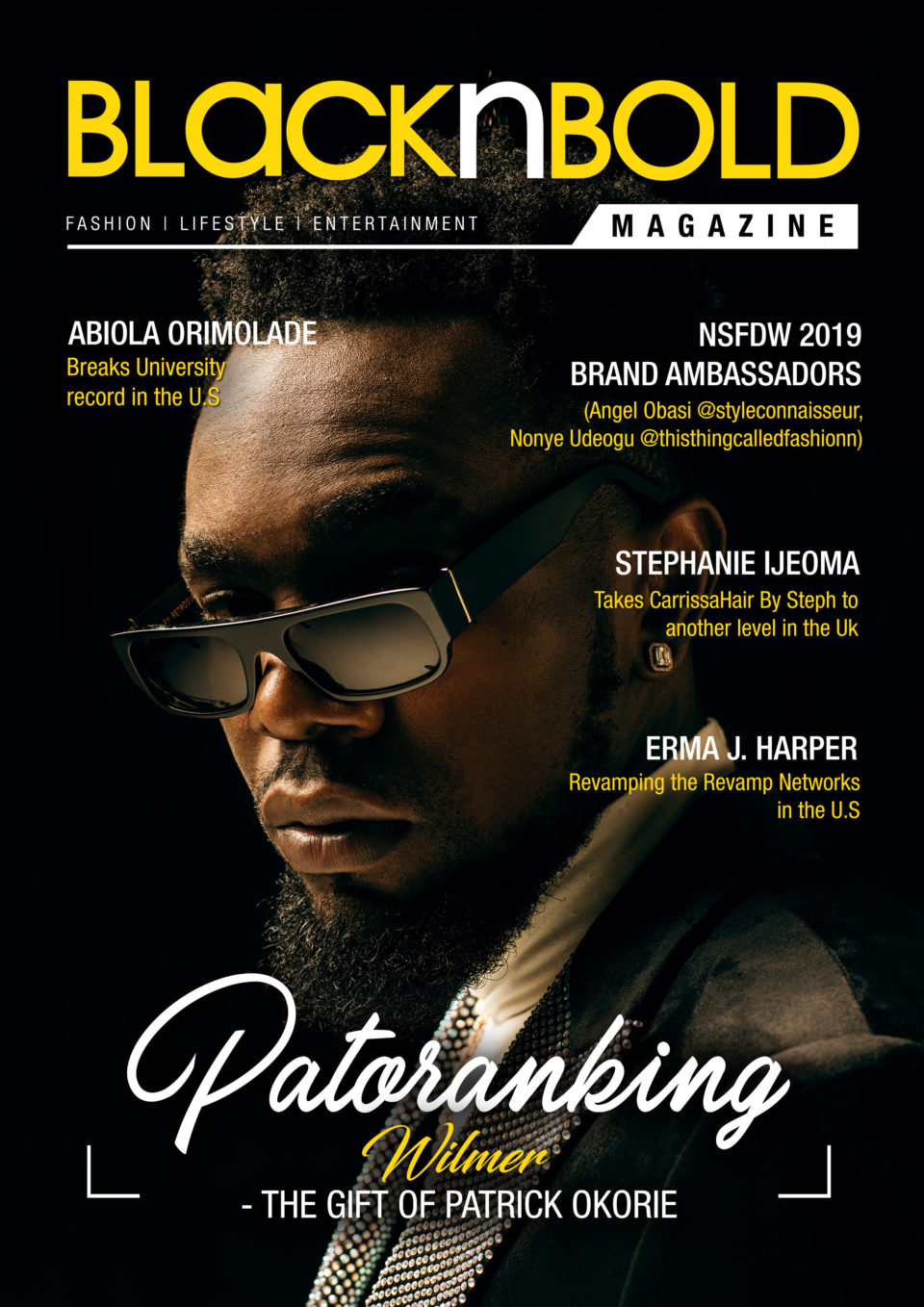 My name is Patrick so Pato was coined from it and Ranking came as the word implies. When you are ranked, it holds relevance. Hence Pato-Ranking

Definitely love the creation of the music, how i feel, the freedom, that spiritual saturation of sounds that you might call inspiration. Hate is a strong word, i think its more of discomfort. I feel slightly uncomfortable with the lack of privacy but i guess it comes with the job.

My  hunger to learn, my anticipation to win and my drive to impact. I represent a whole race, a whole generation and music has given me a voice, there is a responsibility on my shoulders, it is an honour! Also what has kept me going is the Love for what I do and those I do it for.

Apart from my daughter’s name being Wilmer, Wilmer means “Famous” in German and that is a great follow up to my 1st Album – God over Everything. It summarizes my journey (which isn’t over). I prophesied in Alubarika, put out a body of work by putting God over Everything and now I’m famous (Wilmer).

It was humbling, as you know he is an amazing creative and i love the outcome of our work together.

It’s difficult to choose as they are all my faves and they tell different tales that are super dear to me. My inspiration on this album is far fetched…deeply felt.

Afrobeat is ours and the Late Great Fela inspired it. However with the visuals, it was important to portray that he was (we also are) Afrocentric yet fashionable. Our fabrics and designs are globally embraced and this song and video was a union of both our sound and style which was part of the uniqueness of Ba ami.

There’s quite a number of them lol. Play my part with securing the bridge that takes Africa to the world.

Definitely! I will be taking the music to the fans across Europe, Canada and the US very soon.

Style is a way of life. It’s what makes me unique fashionably and otherwise. Sometimes it can be paid for but true style cannot be bought. You can be taught and thereby adapt or you’re born with it.

Change is the only constant thing in life…i like to call it growth. My growth in style is inspired by time and trends, change in taste and a bit of influence from my adventures along with some acquired tastes and habits. I am loving every bit of it.

My Shades… I also love sunglasses in different designs.

Face caps. I have a lot of them.

I spend the most on my craft. Almost all of my earnings are reinvested into my music. I am presently an Indi artist and i fund my music.

Already in the works. Watch out for it!

I love to play soccer.

Don’t believe the hype. It depends on how you decide to see it.