The National Broadcasting Commission, NBC has banned musician Falz’s song, This is Nigeria, from being aired on radio.
The commission in a recent letter said the song contained vulgar lyrics and was unfit for radio.
This was made known on Twitter by broadcaster, Folaranmi Folayan, who shared the picture of a letter the NBC sent to a radio station for airing the song.
Sharing the image, she wrote;
“Apparently Falz’s line “this is Nigeria; look how we living now. everybody be criminal” has been flagged “vulgar” and the song is now declared “unfit for radio”.

See excerpt from the letter below;
“The Commission has observed with great concern the continuous airing of vulgar and indecent music lyrics inspite of our warnings both verbal and written to the station.
“On 30th July, 2018 at about 9:56am, your station aired a song by falz titled “This is Nigeria” laced with vulgar lyrics: “this is Nigeria, look how we are living now, everybody be criminal”.
“Also, an 15‘ August, 2018 at about 3:50pm you aired a song by Wande Coal titled “Iskaba” With vulgar lyrics: “Girl you dey make me kolo, shaking the ass like kolo”, in contravention of Section 3.6.1 and 3.13.2.2c.
Furthermore on 3rd August, 2018 at 2.25pm a song “see Mary, see Jesus” by Olamide was aired laced with casual use of “Mary” and “Jesus” regarded as sacred by Christians contravenes section 4.3.1e”
A fine of N100,000 has been placed on the radio station who played tge songs. 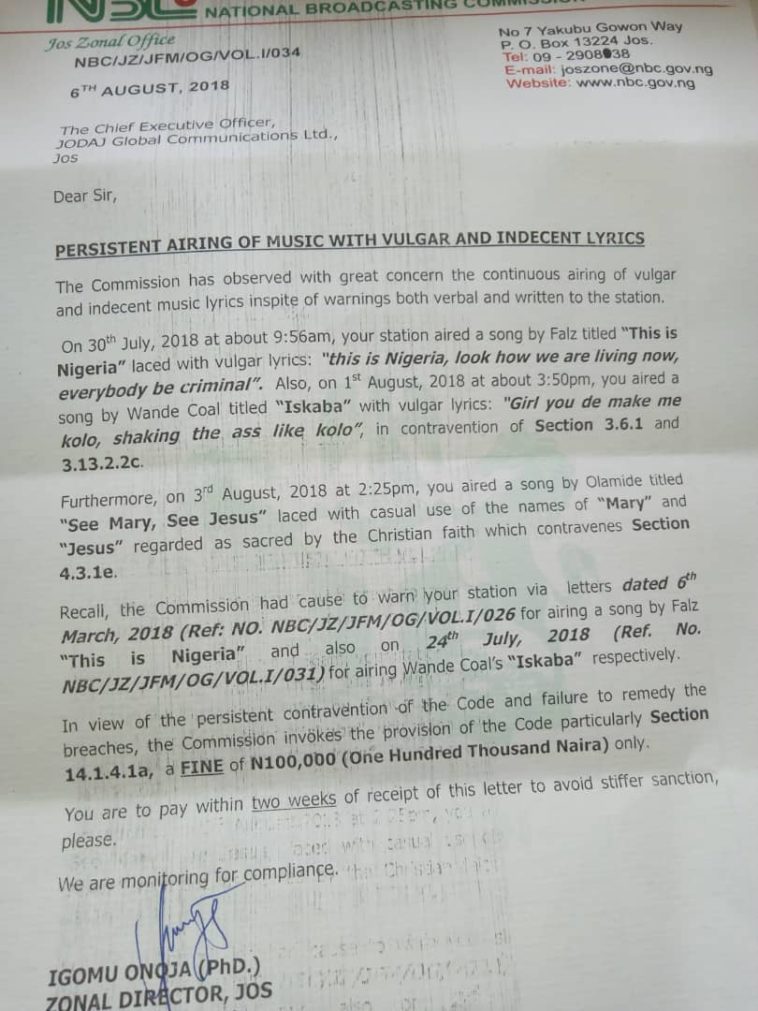