Police in Sweden have launched a manhunt after thieves stole some of the country’s crown jewels from a cathedral and escaped by speedboat.

The unknown thieves stole two priceless crowns and an orb belonging to a 17th Century king and queen  at around midday on Tuesday in Strängnäs, near Stockholm. 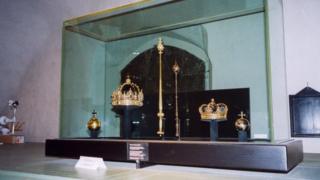 Witnesses have told the police they saw two men running from the cathedral and were later seen motoring off in a speedboat into Lake Malaren. One of the witness, Tom Rowell said:

“I knew immediately they were burglars because of the way they were behaving, It’s despicable that people would steal from a holy building and a historical building.”

“It is not possible to put an economic value on this, it is invaluable items of national interest.

The “priceless” jewel as Mr. Agnevik called them are adorned with gold, precious stones and pearls, and come from the 1611 funeral regalia of Sweden’s Charles IX and Kristina the Elder. The police spokeperson has called them “priceless”