Four robbery suspects arrested in Felele area of Lokoja, Kogi state were paraded by the Nigeria Army on Saturday, July 28. In a report by Eagle Online, the Public Relations Officer of the Command Army Records, Lokoja, Capt. Nick Ejeh, while parading the suspects said that they were in military uniform when they were arrested. According to him the suspects were identifed as Japhet Ataem, Saviour Daower, Joseph Usar and Isaac Danold, all from Guma local government area of Benue state. 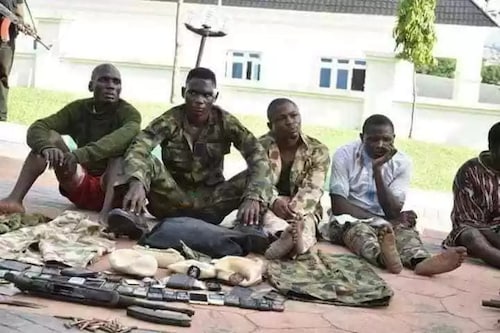 Zara Gift Onyinye Ejeh said that they were carrying out a robbery operation when they were sighted by soldiers on patrol who engaged them in a shootout. According to him, some of the suspects sustained gunshot injury during the encounter while three escaped arrest. Ejeh expressed concern on the increasing use of military uniforms by perpetrators of crimes. The suspects confessed to robbery, kidnapping and other political killings in Benue.

Items recovered from them included one AK47 rifle, two pump action assault rifles and many rounds of live ammunitions. In a related development, the state police command also paraded two suspects believed to be behind recent kidnap and robbery activities along Okene -Lokoja road. The state police command Public Relation Officer, DSP William Aya, who paraded the suspects, gave their names as Hammed Saleh aka Auta of Fulani Camp, Obajana and Dulla Danladi of Fulani Camp, Gada Biyu. The suspects were carrying out a robbery operation when they were sighted by soldiers on patrol.