A member of the Ekiti State House of Assembly, and Deputy Leader, Mr. Ebenezer Alagbada, has defected to the All Progressives Congress from the Peoples Democratic Party.

He joined another member, Gboyega Aribisogan, who had earlier defected to APC after he was suspended for 180 legislative days for alleged anti-party activities. 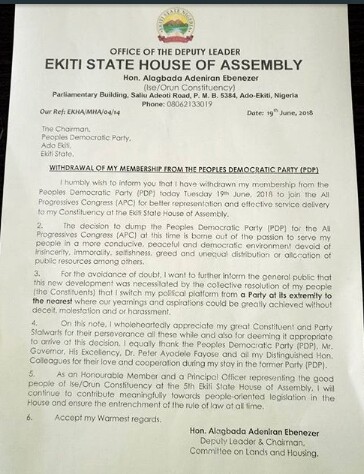 Alagbada who announced his defection on Tuesday at a press briefing in Ado Ekiti said that he took the decision after consulting his constituents.

The lawmaker said he defected because Governor Ayodele Fayose allegedly reneged on his promise to give his constituency the governorship slot.
In his words:

“Consequently, in accordance with the directive of the good people of Ise/Orun constituency of Ekiti State House of Assembly, I hereby resign as the Deputy Majority Leader of Ekiti State House of Assembly and my membership of the PDP due to irreconcilable breaking into factions of the PDP in Ekiti state following the rancorous governorship primary.

“I also use this opportunity to announce my defection to the All Progressives Congress forthwith.”

“WE ARE ALSO NIGERIANS, WE ARE ALSO DISSAPPOINTED”- SUPER EAGLE’S PLAYER, NDIDI EXPRESSES THE TEAM’S DISAPPOINTMENT

"WE ARE ALSO NIGERIANS, WE ARE ALSO DISSAPPOINTED"- SUPER EAGLE'S PLAYER, NDIDI EXPRESSES THE TEAM'S DISAPPOINTMENT