There was drama today, in the Senate house as the Senator representing Kogi West Senatorial District, Dino Melaye, announced his tactical defection from All Progressives Congress (APC) to the People’s Democratic Party (PDP).

APC and PDP senators appeared to have been caught unawares by Melaye’s announcement. 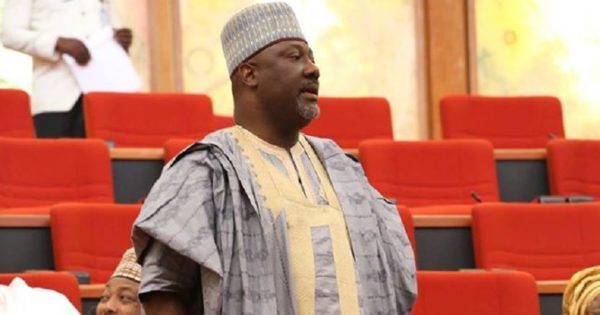 Although Melaye did not mention ‘defection’, he requested Senate President, Abubakar Bukola Saraki, to quickly assign him a seat on the side of the minority PDP.

The embattled Kogi West senator who appeared in Senate chamber clutching a walking stick and wearing neck brace claimed that he was no longer comfortable sitting on the side of APC senators.

“Mr. President, because of the trauma I went through and I am still going through, I want to seek your indulgence that you will call on the sergeant-at-arm to look for a comfortable seat for me on this side (pointing at PDP row) of the divide because I am no longer comfortable sitting here.

“So I want to ask Mr. President that you mandate the sergeant-at-arms tomorrow to look for a seat for me on this other divide of the chamber. And that before you do that today, through help of my walking stick, I will take a comfortable seat close to Papa General Senator David Mark, pending when you get me a comfortable seat on this side.

“I want to thank you very much and say no retreat, no surrender.”

Senate Leader, Ahmed Lawan and Chief Whip, Olusola Adeyeye struggled to ensure that Melaye did not cross the Isle to the PDP side.

Lawan went the extra mile to even offer his seat to Melaye if that would make him comfortable.

Adeyeye said allowing Melaye to move to the PDP side the way the Kogi Senator wanted it would plant disorder in the chamber.

Deputy Senate President, Ike Ekweremadu, said that what Melaye was looking for was welfare and comfort.

Ekweremadu who read relevant sections of the constitution noted that Melaye should be allowed to sit where he would be comfortable as doing otherwise would not be in his interest.

He welcomed Melaye to the PDP side and assured him of his absolute comfort.

Other PDP senators who joined the fray rushed to the APC side to escort Melaye to their side.

Senate President, Abubakar Bukola Saraki in his ruling said, “As he said, we all thank God for his life. Let me on his behalf and on behalf of all of us thank those that gave all the supports during the difficult times and travails he has been through.

“We as members of the National Assembly have always shown that whatever happens to one happens to all.

“I appreciate you all for all the supports and we would continue to speak with one voice and be there for each other.”

He however asked senator Dino, why he made the request to change seats.

Melaye also recounted his ordeal in the hand of the police while he was detained over alleged gun running.

He claimed that the police attempted to kill him “through the application of a chemical substance and secondly by injection.”

“They actually came with an injection to inject me but God intervened. And to Him alone be the glory forever and ever,” he said.

Melaye as well gave thanks to God, for the gift of life, he thanked his fellow senators and he also thanked Nigerians for their support.

Insiders say that Melaye’s defection might influence other members of the senate.