Popular former big brother Naija 3 housemates Nina and Alex have been seen wearing the same hairstyle at the 12th headies ceremony. It is not certain if it was planned as Alex was styled by Swankyjerry and Nina styled by Toyin Lawani, Tiannah’s empire. 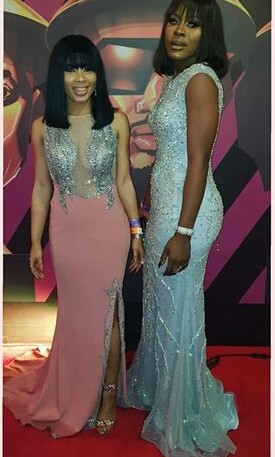 Both housemates however looked so gorgeous as well as their fellow ex-housemates in attendance. Tobi Bakare, second runner up of the big brother Naija 3, presented the rookie of the year award alongside actress Beverly Osu. Both Tobi and Alex who are known to be in a serious relationship, attended the occasion as a couple both richly styled by Swankyjerry.