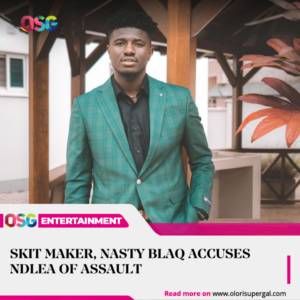 In a lengthy post on Twitter, Nasty Blaq explained in detail how officials of the NDLEA stopped him on his way to a location and asked him to step out of the vehicle he was in.

According to him, he complied with all the orders, yet he was assaulted and one of the men threatened to shoot him, not minding that he’s a public figure.

He added that he soon noticed the officers were raiding the estate and other young men were assaulted too.

The 26-year-old showed a bruise he sustained in his inner lip following the assault and he called for an investigation into the assault.

He also promised to pursue every legal avenue to ensure those responsible are brought to book.