Actress, Nkechi Blessing Slams Actors Who Are Quick To Post A Colleagues Demise 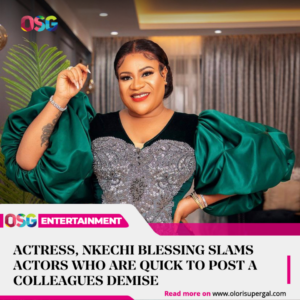 Nollywood actress, Nkechi Blessing has tackled her colleagues who are quick to post pictures of a colleague’s demise without assisting them while alive.

“The way you all rushed to post that RIP ehn.

“I am sure most of you did not rush to her Aid when her acct was posted its 2022 the Yoruba industry needs to do better than this…Just saying respectfully”.

Nkechi Blessing’s post comes a few hours after it was reported that Kudirat Odukanwi better known as Iyabo Oko resurrected hours after being declared dead.

Recall the veteran actress who had been ill for years allegedly passed away on Wednesday, 5th January only to return to life about three hours later in the wee hours of Thursday, 6th January 2022.

According to her daughter, Olamide, who had initially confirmed the death news, reportedly moved her hand after being confirmed dead.

Also, actress, Foluke Daramola-Salako who has initially been helping and keeping up with Iyabo Oko’s health announced her death and later shared a screenshot of her conversation with Olamide to confirm the veteran is alive.