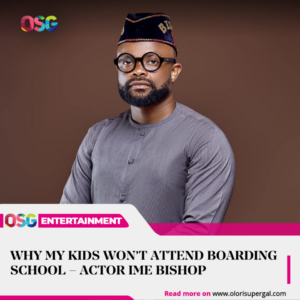 Comic actor, Imeh Bishop, better known as Okon Lagos, has stated that his kids would not attend boarding school.

According to him, his decision revolves around the death of a 12-year-old student of Dowen College, Sylvester Oromoni, who was attacked by five seniors in the boarding school.

“I have never boarded in a hostel in secondary school. The only time I did, I was in my SS3.

“With the death of Sylvester and the post death dramatic twist of events very fresh in memory, I will not allow my kids in a boarding school. If I may, then it will be if and only if life and health security is hugely guaranteed. Even at that, I’m still very doubtful!”

There had been reports that Oromoni died from injuries sustained in an attack by five senior students of the school for allegedly refusing to join their cult.

However, five students and five officials of Dowen College linked to Oromoni’s death have been exonerated by the Lagos State Government.