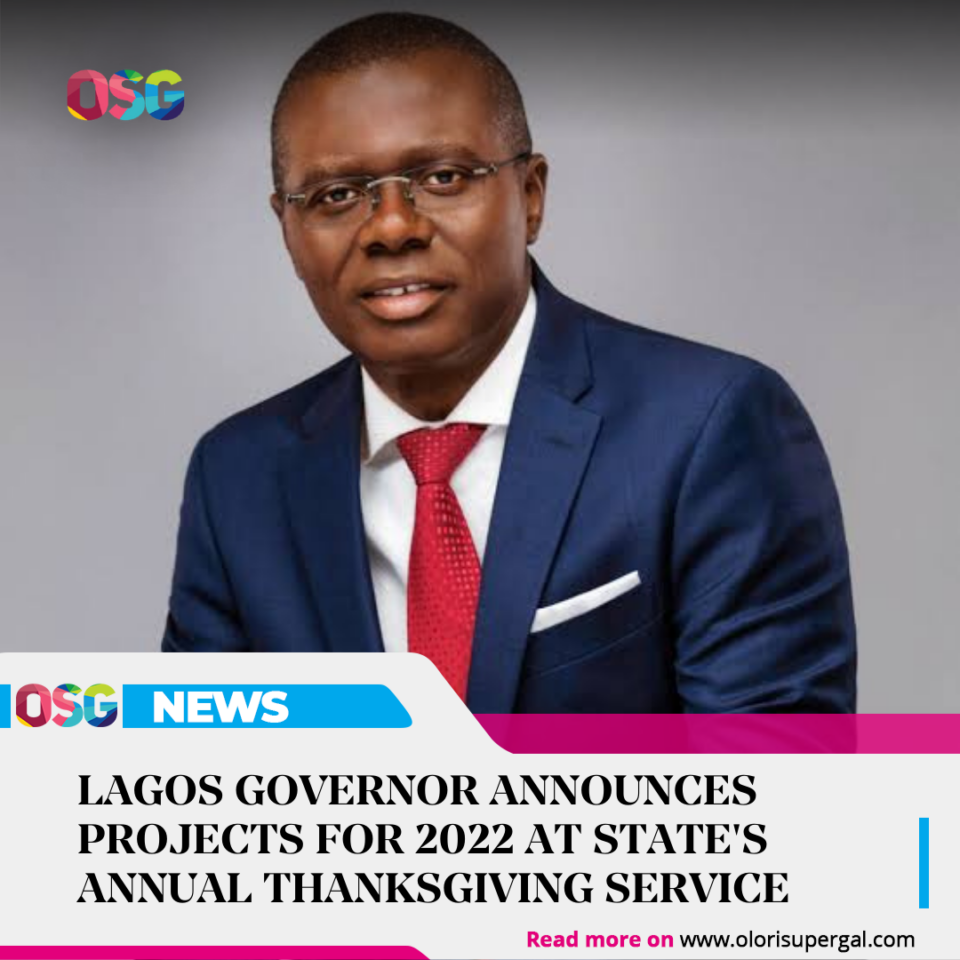 The Lagos State Governor, Babajide Sanwo-Olu has announced the projects and plans for the year 2022, at the 23rd Lagos State Annual Thanksgiving Service held at Lagos House Alausa Ikeja with the theme “Songs of Thanksgiving” on 2nd January 2022.

Sanwo-Olu said he wants Lagosians to see to operate in the spirit of thanksgiving to God to further unlock his favour and mercy on them and Nigeria in general.

He recounted the many trials and tribulations faced by the State in the last year and noted that Lagos and its residents have a lot to be thankful for.

He also described the new year as a year of consolidation for his administration in the delivery of major ongoing projects, including the Imota rice mill and some key transportation projects

He said “Also, this year 2022 will witness a milestone achievement in the rail transportation system in our State, as we expect the 37km Red and 27.5km Blue Line Rail projects to commence commercial operations between the last quarter of this year and first quarter of 2023.

“Equally, construction work on the 38km 4th Mainland Bridge — which will be the longest in Africa — and the Opebi-Mende link bridge will commence this year.

“2022 will also witness, by the special Grace of God, the completion of the ongoing reconstruction work on the 18.75km Eleko to T-Junction in Epe, the 10km Lekki Regional Road, and the section of the Lagos-Badagry Expressway that the Lagos State Government is constructing with the permission of the Federal Government. These are just a handful of the projects that will be completed or advanced this year.”

The Governor reiterated the strict enforcement of the ban imposed on the activities of commercial motorcycles, popularly called Okada, in six local governments and nine council Devt areas as well as highways and bridges last year.

Dignitaries who graced the Thanksgiving Service include, the General Overseer of the Redeemed Christian Church of God, RCCG Worldwide, Pastor Enoch Adeboye and his wife Pastor Folu, Catholic Archbishop, Alfred Adewale Martins, Deputy Governor of Lagos State, Dr. Femi Hamzat, Speaker of the House of Representatives, Mr. Femi Gbajabiamila, Minister of Works and Housing and former Governor of the State, Mr. Babatunde Fashola and his wife, Dame Emmanuella and the initiator of the annual thanksgiving service, the National Leader of the All Progressives Congress, Chief Bola Tinubu.

The Governor took to his official Instagram page to post some pictures from the event and an explanatory caption.