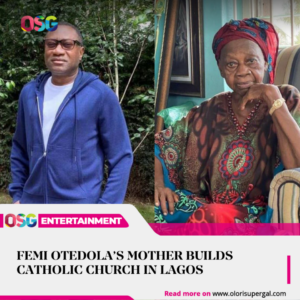 Lady Doja Otedola, the mother of billionaire businessman, Femi Otedola, has built a Catholic church in the Epe area of Lagos State.

The 89-year-old was present at the church – Saint Peters Catholic church- during its dedication today, 25th December 2021 which is Christmas day.

Hl Femi Otedola, took to his Instagram page to share a video of his mother dancing during the mass.

The billionaire revealed that his mother had prophesied about building the church seven years ago.

According to him, the older woman had planned to build the church before she clocked 90 years old.

Noting that the prophecy had come to pass, Otedola noted that there was power in the tongue, as he also appreciated God for making it possible.

He wrote, “This Christmas Morning with my mum, Lady Doja Otedola, dancing at the dedication of Saint Peters Catholic Church, in Epe (built by her).

“Seven years ago, she prophesied that she would build a church before her 90th birthday, which is next year.

“There is power in the tongue! To God be all the glory.”