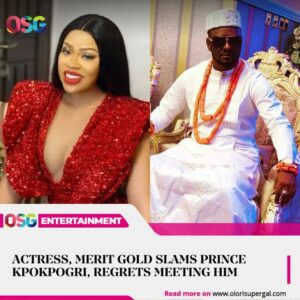 In a series of posts shared on her Instagram stories, the actress slammed Delta-based Kpokpogri and noted that she regrets meeting him. She also claimed that some of her friends are sleeping with Kpokpogri who she described as an “ashawo man.”

A few months back, Merit Gold publicly confessed that she was used by Kpokpogri during his breakup drama with Tonto Dikeh.

According to the actress, Kpokpogri only wanted to use Tonto Dikeh’s influence to get famous. She went on to corroborate Tonto Dikeh’s claims about the sex tapes and photos of several celebrities in Kpokpogri’s possession.

Read her posts below,