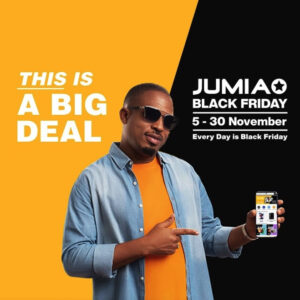 After 30 days of outstanding sales, whooping discounts, and various deals, Jumia Black Friday wrapped up on December 5, 2021. The sales which was initially slated to end on November 30th was extended by 5 days. The extension date gave shoppers the chance to grab last-minute offers.

The mega e-commerce platform provided a fantastic selection of Black Friday deals throughout the sales that left many customers feeling lucky and satisfied.

Popular brands like Umidigi, Oraimo, Kuda, Adidas, Diageo and Sunlight continued to offer massive deals during the sales, with a 10% discount off various products from home appliances to food and groceries, health, fashion and beauty accessories.

This season’s Black Friday event has proven to be the biggest one so far, with all the mouthwatering deals won throughout the sales.

Stephanie Gara, the winner of an iPhone 13, which sold for ?6,850, noted how excited she was to have won the highly coveted item. Damilola Olawade also won big during the treasure hunt, where he grabbed a ?200,000 Jumia voucher after going through the site for hours. Both winners are avid shoppers on the Jumia platform and were determined to win big this season.

Since its inception, the Black Friday sales have been a success year after year, and this season was no different; thousands of happy customers are testament to that.

This year’s Jumia Black Friday sales first made a splash with the ‘kini big deal’ ad that got many people talking. We know we were not the only ones excited to see Naeto C make an appearance on our screens, telling us exactly what to fuss about.

This season’s Jumia shopping event has proven to be one for the books, after shoppers scored impressive wins from different categories. A lucky shopper claimed an iPhone 13 for the price of ?6,850. Another bagged a PlayStation 5 at the price of ?5600, and a ?200,000 shopping voucher plus one year of Jumia prime were up for grabs during the treasure hunt deals.

Stephanie Gara was one of the lucky winners. As soon as she set her eyes on the iPhone 13 going for ?6,850, Stephanie quickly added it to her cart after scouring the app for hours. We know many people spent hours combing through different sections of the app in search of the prized iPhone but couldn’t find it, so kudos to Stephanie on her big win. We are not jealous at all. Maybe a little bit jealous.

Some customers believed that the treasure hunt was the best black Friday deal, and we can’t disagree especially seeing the prizes offered at incredibly high discounts! Others preferred the straightforwardness of the wheel of fortune – All you had to do was spin the wheel and wish for luck.

Shoppers who missed out on the hunt, wheel of fortune, and other deals still enjoyed the discounts spread across various categories on the platform. ‘Brand deal days’ saw different popular brands partner with Jumia to provide shoppers with quality products at discounted prices. Some may not have won the treasure hunt, but they can boast of the incredible deals they got while the sale ran its course.

Food lovers were not left out of the spree. With the Jumia Food app, many cravings were satisfied, on a budget and with free delivery.

Safe to say, many shoppers’ wish lists were fulfilled this season. At least Santa can catch a break…if you believe in Santa.

Rapper, Kanye West Reveals He will Be ...