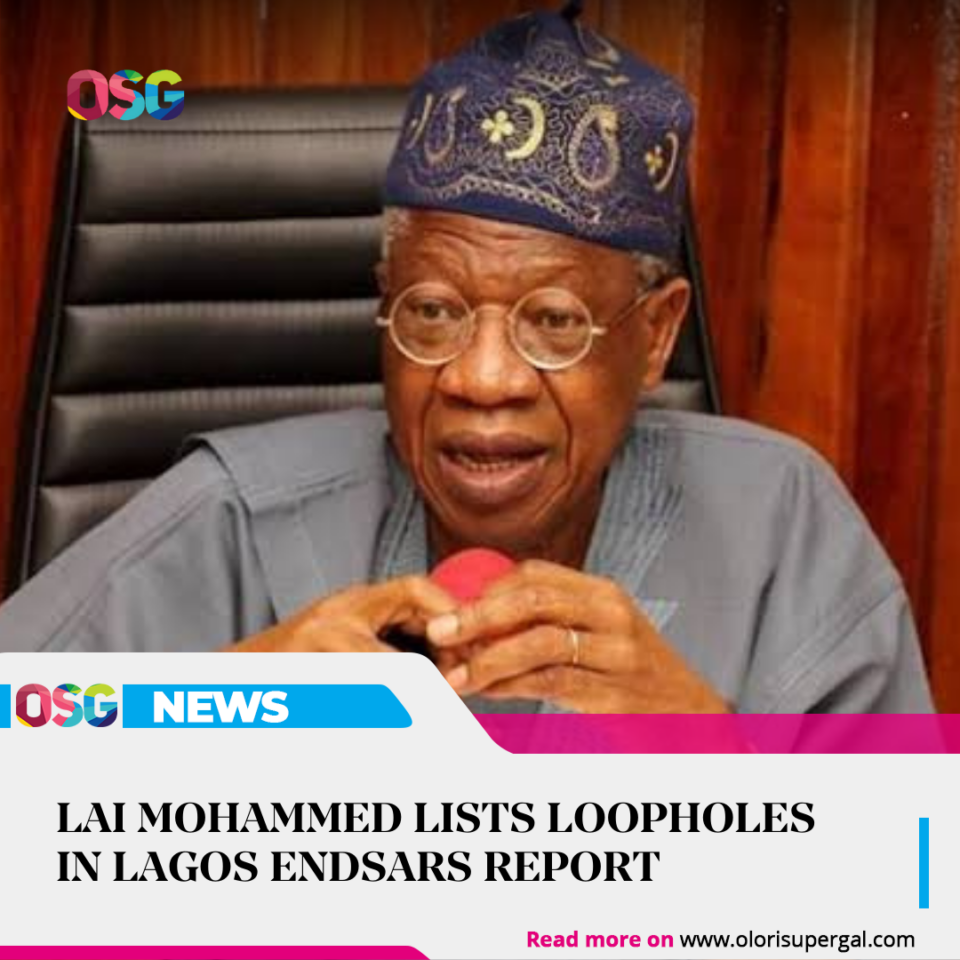 Minister of Information and Culture, Lai Mohammed has faulted the leaked report of the Judicial Panel of Inquiry on Restitution for Victims of SARS Related Abuses and Other Matters.

At a press conference in Abuja on Tuesday, the minister queried the report, pointing out 10 loopholes.

The Justice Doris Okuwobi-led panel on Monday, November 15 submitted its report to the Lagos State Government.

Findings of the 309-page report titled, ‘Report of Lekki Incident Investigation Of 20th October 2020, showed that there was a “massacre in context” at the Lekki tollgate on October 20, 2020.

The panel also claimed that at least 48 protesters were either killed, injured, or assaulted by soldiers and police.

1 – The report threw away the testimony of ballistic experts who testified before it. The experts said, inter alia, in their testimony.

2 – The same panel that said it deemed as credible the evidence of the Forensic Pathologist, Prof. John Obafunwa, that only three of the bodies on which post mortem were conducted were from Lekki and only one had gunshot injury went on to contradict itself by saying nine persons died of gunshot wounds at Lekki.

3 – The man whose evidence (that he counted 11 bodies in a military van where he was left for dead before he escaped) was found to be crucial by the panel never testified in person. Rather, the video of his ‘testimony’ was played by someone else. It did not occur to the panel to query the veracity of the testimony of a man who said he was shot and presumed dead but still had time to count dead bodies inside a supposedly dark van at night.

4 – The panel said trucks with brushes underneath were brought to the Lekki Toll Gate in the morning of Oct. 21 2020 to clean up bloodstains and other evidence, but still found bullet casings at the same site when it visited on October 30th 2020. It said soldiers picked up bullet casings from Lekki Toll Gate on the night of October, 20th 2020, yet claimed that policemen came to the same spot to pick the same bullet casings on Oct. 21st 2020!

6 – How did a man who reported seeing the lifeless body of his brother himself end up being on the list of the panel’s deceased persons?

7 – How can a Judicial Panel convince anyone that the names of some casualties of the Lekki Toll Gate incident listed as numbers 3 (Jide), 42 (Tola), and 43 (Wisdom) are not fictitious names.

9 – The report never mentioned cases of police personnel who were brutally murdered or the massive destruction of police stations, vehicles, e.t c during the Endsars protest. Does this mean that the panel didn’t consider policemen and women as human beings?

10 – The report didn’t make any recommendation on the innocent people whose businesses were attacked and destroyed during the protest in Lagos. I think it was too busy looking for evidence to support its conclusion of ‘massacre in context’.