Singer, Cynthia Morgan Slams Davido And His Fans Over Crowdfunding

Singer, Cynthia Morgan Slams Davido And His Fans Over Crowdfunding 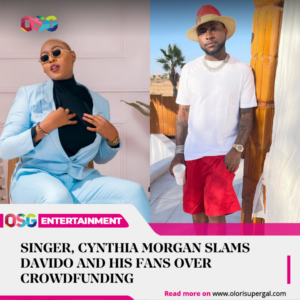 In a lengthy post shared on her Instagram stories, Cynthia Morgan said it is wrong of Davido to ask for crowdfunding because if he has to compel people to celebrate him then it means there’s nothing worth to be celebrated about him.

According to Cynthia Morgan, the fact that they all do music doesn’t mean they are all mates.

She added that Nigerians are myopic that they think everything is about hate saying at least she’s not faking so she should be allowed to hate in peace claiming she’s not a billionaire but N1M is a chicken change for her.

Slamming Davido’s fans, she said she has always known his them to be unintelligent since 2016. However, they were having none of it as they stormed her page to drag her.

Cynthia Morgan’s reaction isn’t a surprising after she claimed Davido had left her messages on read and refused to pick her calls following the fall out she had with her previous record label.

Recall that Davido took to his Instagram story to share a video where he asked his friends to gift him 1 million naira.

On Wednesday, he shared his account number on Twitter and also called on colleagues and his fans to fund the account. In less than twenty-four hours, he had received more than N114, 000, 000