Davido Receives Over N80 Million From Friends, And Fans Hours After Asking For N1 Million

Davido Receives Over N100 Million From Friends, And Fans Hours After Asking For N1 million 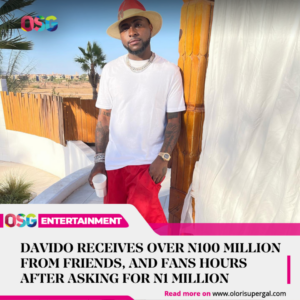 Nigerian singer, songwriter, and record, Davido has raised over N80 million after calling on his friends, colleagues to gift him 1 million naira each.

On his Twitter page, he wrote, “If you know I’ve given you a hit song… send me money… una know una selves o”.

The multi-award-winning artiste also took to his Instagram story to call on some of his colleagues, mentioning a few notable names requesting N1 million from each of them.

In a short video, he wrote, “We rise by lifting others abi? Me I don dey rise dey lifting others for the past 100 years. So I want to know who my friends are. All of my friends one one million Naira. They said we are 30BG. If you don’t send your own. You out of here. You are gone (sic)”.

This comes days to the singer’s 29th birthday celebration, which is on the 21st of November.