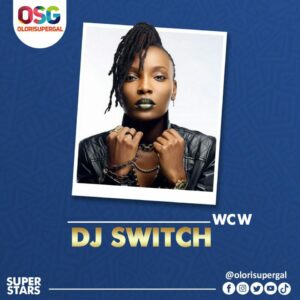 As a graduate of Geology from the University of Port Harcourt, Rivers State, she ventured into entertainment and started as a DJ. She gained attention when her group, Da Pulse, emerged as the winner of the 2009 edition of reality music competition, Star Quest. They further went on to release a hit song titled, So Tey, which featured American rapper Busta Rhymes in the remix.

In 2013, she emerged the winner of the only edition of Glo X-Factor. As part of the prizes for winning, She was signed into a record deal with Sony Music.

DJ Switch, alongside other notable Nigerian youths and celebrities, has been at the forefront of the #EndSars protest, pushing for reforms in the Nigerian Police Force.

On 20 October 2020, the period when the protest was ongoing, DJ Switch live-streamed the Lekki Tollgate Massacre and things have never been the same again especially for her as she showed to the world, how a nation killed without remorse its youths and future leaders.

The Federal Government through the Minister of Information and Culture, Lai Mohammed, and others, tagged the Instagram Live video by DJ Switch false and doctored.

Following an outcry, Lagos State set up a Judicial Panel On Restitution For Victims Of SARS Related Abuses And Other Matters which presided over the EndSars protest and Lekki massacre over a year.

The panel in its 309-page reports presented to the Lagos State Governor, Babajide Sanwo-Olu on 15th November 2021, indicated the soldiers and officers of the 65 Battalion of the Nigerian Army and Police.

Her reaction after the report reads;

“Shattered so many lives, tried to destroy mine. Only for what you desperately tried to hide to be made public… by you! The truth needs no defence! #EndSARS”.