Kanye West and Drake Appear To Have Squashed Their Beef

Kanye West and Drake Appear To Have Squashed Their Beef 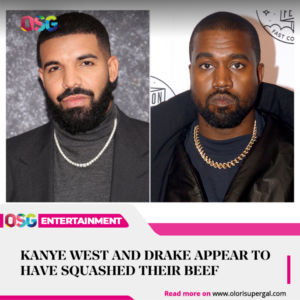 American and Canadian rappers, Drake and Kanye West now known as Ye, appear to have squashed their long-time beef.

The Donda rapper shared a photo of himself alongside Drake and Record Label Owner, J Prince on Instagram on Tuesday, captioning the post with a single dove emoji.

J Prince also shared the image, writing that the group had a “beautiful night” in Canada on Monday.

Not long after Kanye posted, Drake shared a video of him and Ye together… tagging their location in Toronto. It appears they were buddy-buddy while listening to American comedian, Dave Chappelle rock the mic.

In the video, Drake’s got his arm around Kanye … and it sounds like the peace talks went down at Drake’s crib, based on Dave’s comments.

The meetup comes about a week after West addressed his years-long feud with Drake in a video shared by J Prince on Twitter, saying that he was ready to put it “to rest.”

“I’m making this video to address the ongoing back-and-forth between myself and Drake,” West said in the video. “Both me and Drake have taken shots at each other and it’s time to put it to rest.”

Inviting Drake to perform with him, West concluded: “I believe this even will not only bring awareness to our cause but prove to people everywhere how much more we can accomplish when we lay our pride to the side and come together.”

The feud between the two rappers has spanned years. West just recently mentioned his back-and-forth with Drake when he appeared on the Drink Champs podcast on 4th November.