“What A Tough Job You’ve Got” – Okon Lagos, Calls Out Lai Mohammed Over Lekki Tollgate Massacre

“What A Tough Job You’ve Got” – Okon Lagos, Calls Out Lai Mohammed Over Lekki Tollgate Massacre 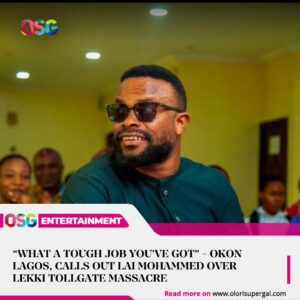 Nollywood Actor, Ime Bishop Umoh better known as Okon of Lagos has called out the Minister of information and Culture Layiwola ‘Lai’ Mohammed.

This comes after the Lagos state judicial panel on EndSARS confirmed the killings of peaceful protesters at the Lekki tollgate on 20th October 2020.

Recall that the minister, during the one-year remembrance of the Lekki tollgate massacre said most of the claims of killings were false and misleading as most of those who made the claims of losing people were yet to show up and give evidence a year after such allegations.

“The truth about the Lekki tollgate killings is out now! What a tough job you’ve got to defend a lie. This sleeping dog refuses to lie”.

“Big step to a big win for Justice and the people.