Singer, Falz Advises Youths Ahead Of The 2023 Election

Singer, Falz Advises Youths Ahead Of The 2023 Election 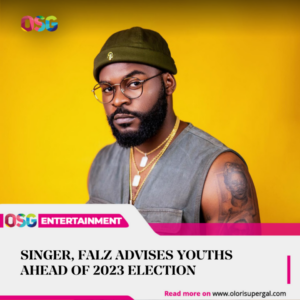 The lawyer and singer, better known as Folarin Falana took to his Instagram story, to express his pleasure after the Lagos State Judicial Panel confirmed the Lekki tollgate massacre.

He advised the youths to be careful with the upcoming elections as “animals” will soon ask them for their votes.

He also stated the measures the government went through to deny the Lekki Massacre from refusing ambulance service and carting away dead bodies.

Recall the artist was among the celebrities at the forefront of the protest a year ago and he along with other celebrities also organized the car memorial session for those lost at the Lekki Massacre.