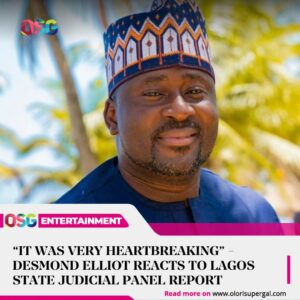 Nigerian actor and politician, Desmond Elliot have reacted to the Lagos State Judicial Panel report on the End SARS protest which was presented to Governor Babajide Sanwo-Olu on Monday.

While speaking on the Wake Up Nigeria programme on TVC earlier today, Elliot said that he read the report but already knew that the incident was chaotic.

Elliot also claimed that he knew that the truth regarding the incident would surface stating that it was a pattern for the government in power.

He said, “I read it and it was very heartbreaking. Heartwrenching. I knew there was a calamity, chaos. Except you are not Nigerian or you are not human. You would feel for everybody.

“I have always said something. When MKO died and the government of the day denied and denied, it took this government to come and say you know what, we have wronged you; this is the truth. And they actually gave Democracy Day.

“We have always said the truth comes out. There is no how you would try to hide it, the truth would come out.”

The member of the Lagos State House of Assembly, however, commended the state government for letting the report see the light of day.

He said that the government’s action was commendable because it would have known that the report would indict it but still allowed it to be released.

He added that “There is going to be an official statement so let me not jump the gun because I am also in office”.

Recall that the lawmaker came under fire after the Lekki toll gate incident for calling on the Speaker of the state House of Assembly to “address certain things” like “the Nigerian youth, the social media, the social media influencers”.

“Everlasting Confusion For The Wicked” – Comedian, ...