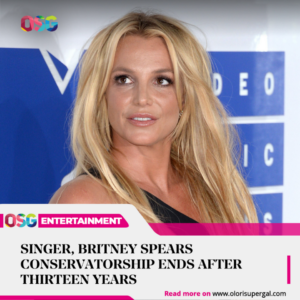 American singer and songwriter, Britney Spears is free of the conservatorship that has ruled her life, career, and finances for thirteen years.

The controversial conservatorship was terminated on 12th November by a Los Angeles judge at the request of the pop star and her legal team.

The ruling comes after Spears delivered a blistering statement about the conservatorship in court in June, calling it “abusive” and saying it left her feeling “bullied” and “alone.”

The hearing was the first since her father, Jamie Spears who had been in control since 2008, was suspended from his role as a co-conservator. He has repeatedly denied allegations that he mishandled the conservatorship.

Spears is now in charge of her estimated $60m estate and can make personal decisions herself for the first time in years.

The 39-year-old star took to Instagram to share footage of #FreeBritney supporters outside the court house celebrating the end of her conservatorship.

All The Details From The #JumiaBlackFriday