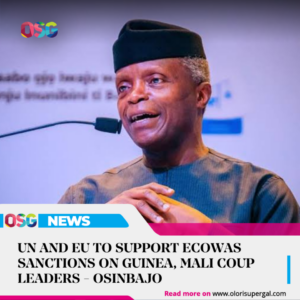 The Vice President, Prof Yemi Osinbajo, SAN, has urged the United Nations and the European Union to support the sanctions placed on Mali and Guinea coup leaders by the Economic Community of West African States.

In a statement made available by his aide on Media & Publicity, Osinbajo who was representing President Muhammadu Buhari said this at the ECOWAS Extraordinary Summit of the Authority of Heads of State and Government held on Sunday in Accra, Ghana.

Osinbajo stated that the Authority had resolved to uphold the sanctions it had imposed on the coup leaders of Mali and Guinea on September 26, 2021, insisting that international organisations such as the UN and EU must support the sanctions for democracy to thrive in West Africa.

He noted that coups are a thing of the past that should not be present in West Africa adding that ECOWAS Heads of State and Government will continue to prevail on the military juntas in Guinea and Mali to return their countries to democratic rule.

He said, “One of the important points that the ECOWAS Heads of State and Government make is that coups and coups d’état generally are just completely unacceptable and that we cannot continue to have a situation where they are tolerated for the simple reason that in Africa, West Africa in particular, we have gone way beyond military coups as an answer to the question of change in political actors.

“There is a very strong feeling amongst the Heads of State that we must insist, that other international bodies: the UN, EU, and other regional groups must support the impositions of sanctions on individuals and groups that choose not to follow the democratic process of change of government and choose to go by way of coup d’état.”

However, the Vice President acknowledged the efforts Guinea is making to return to democratic rule while noting that Mali, on the other hand, was in a ‘difficult situation’.

Osinbajo added, “It appears from all indications that much progress has been made in Guinea, although we are still concerned that there ought to be much more clarity on transition.

“But Mali is a much more difficult situation, there is much concern because very little progress had been made”.

The ECOWAS Summit, which was attended by leaders from 13 countries, also called “on the African Union, the United Nations, and the bilateral and other multilateral partners to endorse and support the implementation of these sanctions.”