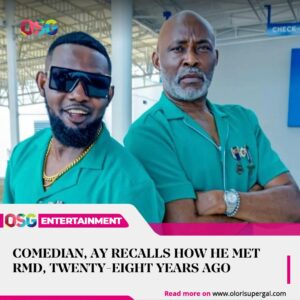 In a lengthy post on his Instagram page, AY disclosed that he ran into RMD at a motel in Warri, Delta State, and he told him about his love and passion for acting.

He further said RMD encouraged him but insisted he gets more education aside from his job as a bartender. He eventually got admitted into Delta State University and had the privilege of inviting RMD to one of his shows on campus as an undergraduate

“About 28 years ago I ran into a great man at Palm Groove Motel in Warri, and I told him how I would love to be an actor someday just like him. He encouraged me but insisted that I get some more education, aside my job as a bartender at NNPC Junior staff club in the city of my birth.

“I eventually got admitted into Delta state university and had the privilege of inviting him much later to one of my shows on campus. The relationship found a better bearing based on how I was able to deliver a good show at the time.

“Fast forward to 2021, I am about to release my fourth movie as a filmmaker with the same man I approached 28 years ago and the icing on the cake is that I starred in these movies with the man I fondly call OSE.

“Today the excitement of my dreams coming true is beyond the description of words. Dreams don’t work unless you take action.

“The surest way to make your dreams come true is to live them.When you want something bad enough, let that drive push you to make it happen.

“Sometimes you’ll run into brick walls that are put there to test you. Find a way around them and stay focused on your goal. Where there’s a will, there’s always a way”.

AY also asked his fans to thank the veteran actor who according to him is the father figure that he has made acting history with in the Guinness World records.