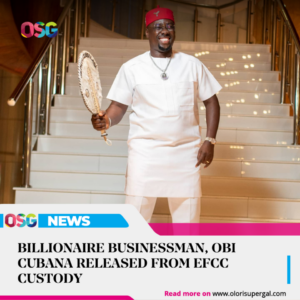 According to reports, the famous socialite was granted administrative bail on Tuesday afternoon after he spent the night at the agency’s facility following his arrest on 1st November.

His case borders on alleged money laundering and tax fraud, according to The Punch.

After the news of his arrest broke out, Nigerians including his close friends, associates, and family members called for his release using the hashtag, free Obi Cubana.

Meanwhile, shortly after his release, he took to his Instagram page and shared a picture of himself and wrote,