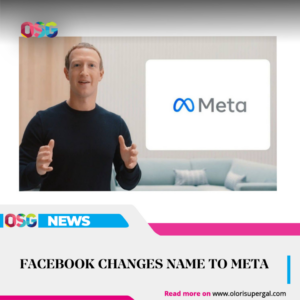 Social media giant, Facebook has changed its name to Meta as it continues to face scrutiny over its business practices.

The founder and Chief Executive Officer (CEO) of the company, Mark Zuckerberg announced the name change on Thursday, 28th October 2021.

According to Mark, the parent company’s name is being changed to “Meta” to represent a future beyond just its troubled social network.

While speaking during the annual developer conference, he said, “We’ve learned a lot from struggling with social issues and living under closed platforms, and now it is time to take everything that we’ve learned and help build the next chapter.

“The metaverse is the next evolution of social connection. It’s a collective project that will be created by people all over the world, and open to everyone. You’ll be able to socialize, learn, collaborate and play in ways that go beyond what’s possible today.

“Whether you’re imagining feeling closer to your long-distance family members or dancing with your friends wherever they are, share your vision for the future in the comments below.”