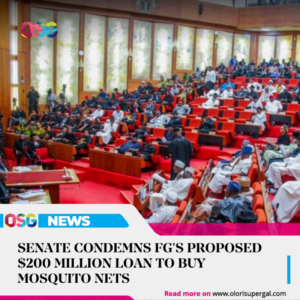 The Nigerian Senate has strongly condemned the proposal by the Federal Ministry of Health to borrow $200 million under the malaria programme to buy mosquito nets in the 2022 budget.

A member of the Senate Committee on Health, Senator Gershom Bassey on Tuesday, made the condemnation during the 2022 budget defence of the Federal Ministry of Health

Bassey told the Permanent Secretary, Mahmuda Mamman that the proposal for the purchase of mosquito nets was a big issue, expressing concerns that borrowing $200 million was outrageous.

The committee’s condemnation was in response to the Permanent Secretary’s earlier submission of the intention to borrow the amount for the purchase of mosquito nets.

The panel further demanded the total needs of the agency to ascertain if there was a need for borrowing.

The Executive Director, National Primary Heal Care Development Agency, NPHCDA, Dr. Faisal Shuaib in his further clarification noted that the $200 million was for importation and local production of mosquito nets.