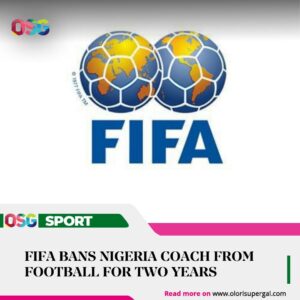 Football governing body, FIFA, has banned another Nigerian coach, Remi Amadi of Cofine FC of Uyo, from all football-related activities for the next two years.

The body’s disciplinary committee conveyed this decision to the Nigeria Football Federation (NFF) and it is a consequence of a similar ban imposed on the coach by the NFF Disciplinary Committee at its meeting on August 16, 2021.

The worldwide effect was activated by the FIFA Disciplinary Committee at its meeting on October 5, 2021.

Yusuf, who has since served his suspension, has been recalled by the NFF to the Super Eagles, while Siasia is still battling to clear his name from an alleged plot to fix games.

Tope Alabi’s Husband Celebrates Her On Her ...