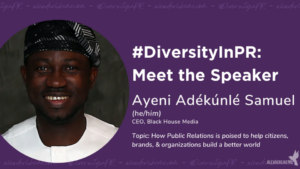 LAGOS | NIGERIA: The founder and CEO of BlackHouse Media (BHM), Ayeni Adekunle, has been announced as one of the speakers at the #DiversityInPR Conference which will hold on Thursday, October 14, 2021, via teleconferencing application, Hopin.

Ayeni’s session, titled ‘markets of the future’, will interrogate the possibility that the ideas, businesses, principles, and successes that’ll drive the next generation will come from totally unexpected people, places, and platforms.

Ayeni will be joined by the Managing Director of Creative Fire, Jordan Baptiste; Chief Strategist and President of Focus Communications Inc, Loretta Lam; Global Head of Diversity, Equality, and Inclusion at ERM, Neil Griffiths, as well as 17 others who have also been confirmed as speakers and panelists.

The conference is organized by the founders of ALeaderLikeMe, Priya Bates and Advita Patel, in partnership with SummersDirect Conferences and Events, and seeks to examine the dynamism of PR in the past year and what terms such as innovation, service delivery and reputation mean to the profession in today’s world.

Speaking ahead of the event, Ayeni stated his enthusiasm about sharing insights on the changing global marketplace and how his company, BHM, is growing through its global expansion. “Public Relations consultants currently fall into three categories – those who are inquisitive about the changing marketplace, those who are leading the change, and those who are comfortable with business as usual, and it will be interesting to share how they work within the global ecosystem. There are critical issues such as citizen advocacy, technology, and accelerated growth, and building the markets of the future, and how we are working towards marrying all of these at BHM.

“We recently expanded our frontiers by commissioning operations in the United Kingdom to use our unique model within an environment that is in dire need of what we offer. And one of the key ways we are able to do this is because of the diversity we offer as a company, and as people within that company.

“This is why I have been passionate about using technology and innovation to drive a future where everyone can take active parts and win.”

Ayeni has been a strong proponent of diversity within the African PR landscape – BHM Group currently boasts of an over 51% female workforce, which currently comprises of an all-woman team lead structure. 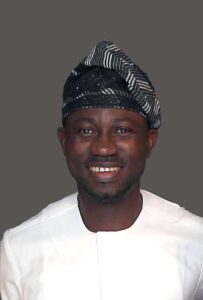 Ayeni started his career in the media as a journalist with over 10 years of experience in the field, before founding BHM in November 2006. He has founded several new media platforms, including Nigerian Entertainment Today, and Neusroom, as well as Nigeria’s largest gathering of entertainment professionals – NECLive. He is also the founder of Pan-African communications company ID Africa, as well as PR Tech startup Plaqad.com

ALeaderLikeMe is an empowerment community that helps underrepresented women and non-binary people of colour progress further in their careers while achieving their leadership goals. The community aims to help future leaders build courage, stand up to real and perceived barriers and take advantage of future opportunities.

Bates, President, Inner Strength; and Patel, Director, CommsRebel, the founders of the community shared their excitement about the Diversity in PR conference and Ayeni’s participation, “In the past 12 months, it has become clear that the conversation around diversity, inclusion, equity and belonging has fundamentally changed across the world.

Public Relations professionals are looking at their organizations, their departments, and themselves and reflecting on the roles they play in protecting systemic norms. Now, we are looking to see how that will shape innovation, delivery, and our reputation as a profession.

Ayeni Adekunle will bring his unique standpoint on bridging communications between Africa and the UK, and how diversity, technology, and advocacy will change the world as we know it.”