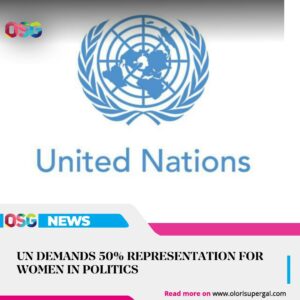 The United Nations has conveyed concern over the poor representation of Nigerian women in elective and leadership positions which, it said, had remained the lowest in the world.

Angela Muruli, the Programme Analyst of UN Women, stated these in an interview with journalists at the training programme, and the inauguration of the Network of Young Women in Politics in Abuja on Tuesday.

The programme was organised by a political movement, Women in Politics Forum, with support from UN Women and Sweden Sverige.

Maruli said it was important for women in Nigeria to be involved in politics because when women are involved in leadership, they make decisions that benefit the whole society.

She said, “For starters, Nigeria has almost the lowest representation for women in sub-Sahara Africa and in fact in the world.

“So for the giant of Africa, it is quite worrying that half the population are notably represented by people who look like them in spaces of power.”

She added, “There is no necessary number for best practice but we live in a world where 50 percent or even maybe slightly more women are. So what we will like to see globally are societies where women have equal participation, so that is 50-50.”

The President, WIPF, Ebere Ifendu, said the programme would be sustained towards the 2023 general election.

She said, “I have always said 50-50, I have never been an advocate of affirmative action. It is important for women to actually know that this thing is something we can all do; we have the capacity as much as the men.”