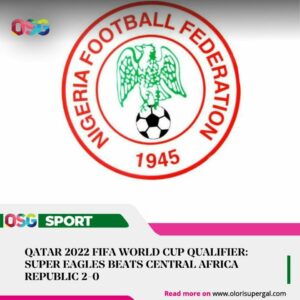 After a shocking defeat at home, Nigeria had the last laugh in their Qatar 2022 FIFA World Cup Qualifier after beating the Central African Republic 2-0 in Cameroon on Sunday.

Leon Balogun, who was held responsible for the first leg defeat, broke the deadlock scoring for the Super Eagles in the 32nd minute after latching on to a long throw from Super eagles captain, Ahmed Musa. The goal was his first in Super Eagles shirt.

CAR still proved stubborn for the visitors who found it hard to break their defense with Musa playing into goalkeeper Prince Samolah’s hands and Kelechi Iheanacho taking a long range shot off the mark.
Napoli striker Victor Osimhen doubled Nigeria’s lead before the referee called half time scoring with an assist from Troost-Ekong inside Les Fauves 18-yard box taking the lead into the second half.

The second half saw missed chances from the Super Eagles who held fast to maintain the lead throughout the rest of the match.

Nigeria will face Liberia in a second-leg fixture in November.

NUPENG To Embark On Nationwide Strike Over ...