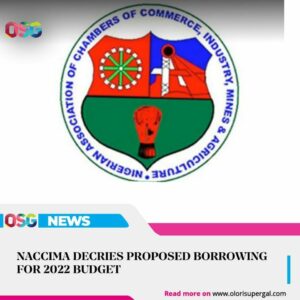 The Nigerian Association of Chambers of Commerce, Industry, Mines, and Agriculture has disclosed that it is worried by the plan of the Federal Government to increase borrowing to finance it’s proposed N16.39tn for 2022.

According to a statement by the association, the National President, NACCIMA, Ide Udeagbala, welcomed the timely presentation of the budget by President Muhammadu Buhari.

He, however, said the needed to explore frameworks for concessions and public-private partnerships for capital projects execution.

President Buhari had on Thursday presented an income and expenditure plan it tagged Budget of Economic Growth and Sustainability to the National Assembly.

Udeagbala said an increase in the deficit to N6.26tn which would be funded by borrowing was worrisome.

He said, “A sustainable debt profile requires that borrowed funds must be used for critical infrastructure projects that will enable payback of these loans.

“There are speculations that the borrowings have been encouraged by projections that the Nigerian economic will grow by 2.4 percent in the year 2022 well above earlier projected  GDP growth of 1.8 per cent.

“While it is an accepted fiscal option across the world for countries to resort to  borrowing  to finance shortfalls in their budgets,  there must be caution in what component of the budget will be financed by borrowing.”

Udeagbala further stated that considering the cycle of international oil prices, crude sales could not be relied upon as firm and assured sources of revenue.

He said, “It was also said that the decision on scaling up borrowing is based on assurances of revenue from the prices of crude which now hover around 80 dollars well above $57 backed by  projected, 1.88m barrels a day.”

He said FG must continue efforts to diversify the economy, improve on non-oil revenue, and deliver on the upgrade of infrastructure while improving the security situation in the nation.

He added that it would enable an increase in productive activities, especially in the agric sector.
He added that there must be caution in what component of the budget would be financed by debt.