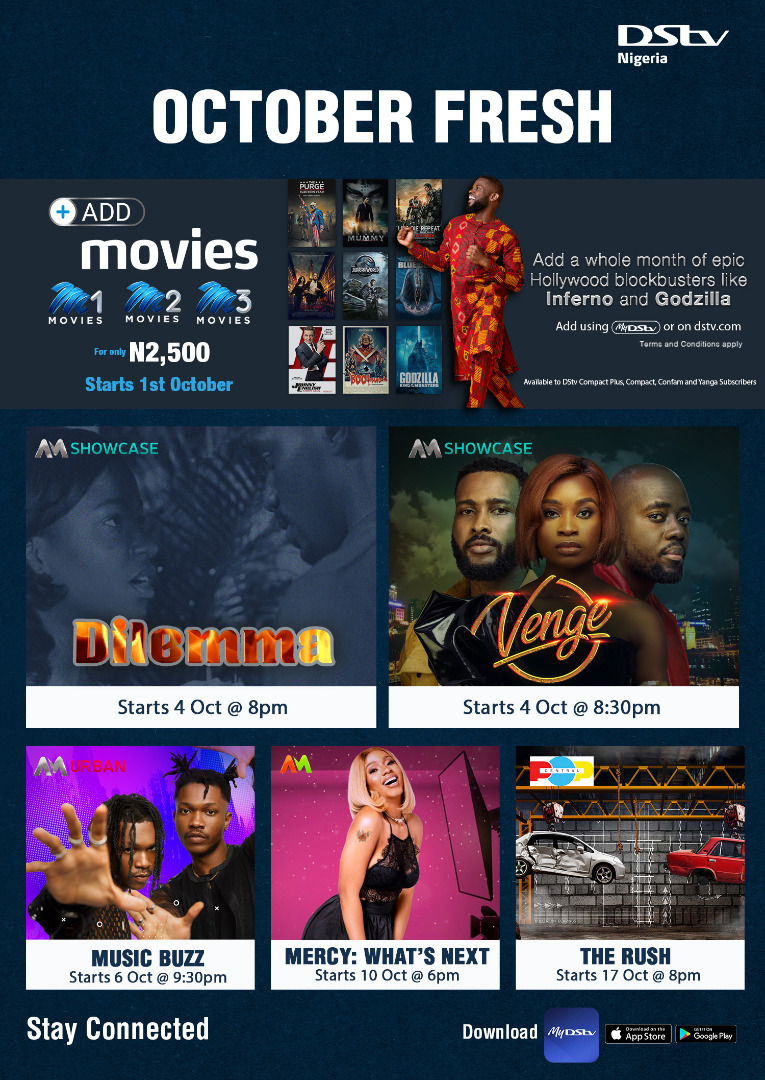 The month of October is here and we finally get to watch all the new shows and series that have been on our minds since the teasers were aired on our TV and various devices last month. We also can’t wait for our favourite programmes which are returning with another season!

From reality TV shows to telenovelas, cooking and talk shows, the content lineup on DStv this October has us in awe!

So, stay connected to DStv to enjoy the following content this month:

Africa Magic, the continent’s leading provider of premium and authentic African stories, is set to premiere new double bill telenovelas, “Dilemma” and “Venge”, from Monday, 4th October exclusively on Africa Magic Showcase. Dilemma follows the lives of two estranged lovers, while Venge tells a scandalous story of secrets, lies, and betrayals. Dilemma airs every weeknight at 8pm, while Venge airs every weeknight at 8:30pm. Both on AM Showcase, DStv Channel 151.

Music lovers are not left out as the Music Buzz, a weekly countdown show from Wednesday, 6th October at 9:30pm on AM Urban, DStv channel 153, will cover the hottest entertainment trends across Nigeria. Every week, the hosts will discuss with different guests ranging from OAPs to music commentators, comedians, and a host of other industry players on trendy industry issues.

My Naija Plate, Hair Knockout and Much More!

Nigeria’s Chef Winnie Nwania joins Honey TV with “My Naija Plate” to celebrate Nigerian food every Tuesday at 7:30pm. A new season of Adeola Ariyo’s “Hair Knockout” is back for season two and will air Tuesdays at 5:30pm. DStv viewers can also watch the awesome Pearl Umeh join the other ladies of “The Buzz” for a fifth season, Mondays and Wednesdays at 5pm! These shows will air on Honey, DStv channel 173.

This show is a spinoff to the early Mercy & Ike Show – however, this time, there will be a focus on Mercy’s growth, lifestyle & more! “Mercy, What’s Next” will air on Africa Magic Showcase, channel 151, every Sunday at 6pm, from Saturday, 16th October.

The show is making its way back with a Twelfth season, “The Age of Craftsmanship” and fans can look forward to the unique survival tactics and games. This year’s show will feature 2010 GUS winner and top Nollywood actor, Kunle Remi as taskmaster. Catch GUS on Africa Magic Family, DStv channel 154 on Saturdays and Sundays at 8pm from Saturday, 16th October.

Pop Central is set to excite reality show enthusiasts with The Rush. A high energy, adrenaline pumping and physically intense reality show. The show will see the contestants battle it out during tasks and also see them given the power to eliminate each other weekly, while the viewers will vote to keep their favourite(s) in. The show will air on Pop Central, DStv channel 189, daily from 7pm from Sunday, 17th October.

Felabration is the annual festival of music and arts commemorating the life and times of Nigeria’s foremost musical icon, the late Fela Anikulakpo Kuti. Arts, dances, symposiums are always created each year in his honour and this year, DStv is bringing it to your screens from the 11th -17th of October on DStv channel 198.

AM Turn Up Friday and Owambe Saturday

Also, download the DStv App on the Apple and Google Play stores to stream content of your choice, anywhere, anytime, and on any device. Easy payments? You’ll find all the self-service functions and answers to any of your queries on the MyDStv App to make life and entertainment a breeze.

Power Is Not Given On A Platter ...