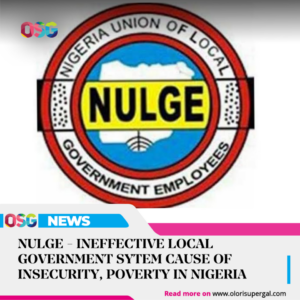 The National Union of Local Government Employees (NULGE) has restated its call for the autonomy of the local government system for Nigeria to overcome most of its challenges.

The National President of the union, Mr. Olatunji Ambali, stated this in Akure, the Ondo State, capital over the weekend. He emphasised the spate of poverty and insecurity in many parts of the country currently and noted that these were happening because the local government system has been crippled and rendered useless.

He said, “As of today, you can no longer move from one state to another without initially asking if you will get home safely. Insecurity in the South, East, and North. This is not the Nigeria of our dream. We are bedeviled with abject poverty, joblessness, hopelessness, a threat to nationhood.

“Everybody now result to ethnic agitation. We have come this far because Nigeria is no longer working. The nation has failed the masses. At 61, Nigeria has abandoned her constitutional role in guarantee security and peace in the country.

“This can be traced to the systemic decay and destruction at the LG level. Local government system is the most strategic, most relevant, most popular and most acceptable tier of government in the country.”

He said “We need a politically free and financially dependent local government administration. The local government has been raped over the time; it has witnessed systematic destruction as a result of misrule and stealing of local government funds, thereby militating against progressive development at the grassroots level.

“No wonder, as of today, we are bedevilled by insecurity and poverty. We are deprived and also encumbered by unemployment, homelessness just because we have a failing system in the local government”.

NLC – Privatisation Of Electricity Has Increased ...