NLC – Privatisation Of Electricity Has Increased Suffering Of Nigerians

NLC – Privatisation Of Electricity Has Increased Suffering Of Nigerians 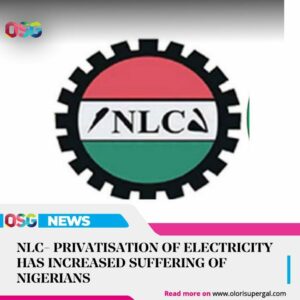 Comrade Kayode Martins, the chairman of, Oyo State chapter of the Nigerian Labour Congress (NLC) has said that privatisation of electricity has increased the suffering of many Nigerians.

Martins stated this while speaking at a public symposium organised by the Coalition for Affordable and Regular Electricity (CARE), over the weekend in Ibadan.

The NLC Chairman while speaking at the event with the theme “Privatisation of Electricity, Curse or Blessing” stated that electricity privatisation would have a greater benefit to Nigerians particularly the artisans if it was sold to the right people.

He maintained that the privatisation was a blessing to those benefiting from the rottenness in the power sector, but adding to the suffering of the masses.

While speaking further, he lamented that some Nigerian youths and artisans have become jobless due to erratic power supply by electricity distribution companies.

He said, “PHCN was not totally sold, the government still has 40% stake, and government failed to play its own part. We are blessed with a lot of resources in this nation, power privatisation would have been a blessing if the management was committed to the right person, but it rather added to people’s suffering.”

Convener of CARE in Oyo State, Comrade Akinbodunse Shedrak described privatisation of the power sector as a waste of money.

He lamented that the government is still pumping money into a system that is not yielding positive results.

Shedrak said, “We were promised that every house in Nigeria will be metered within three months before the privatisation. Nigeria Electricity Regulatory Commissions is one of the problems electricity consumers are having.”

A member of CARE, Comrade Abiodun Bamigboye while speaking, said that privatisation was alien to the Nigerian constitution.

He said, “We are making efforts to bring things to normal. A symposium like this would help Nigerians to know their rights. There should be a united force among the consumers so that this problem can be resolved”.

Davido – It Was Unreal Being Picked ...