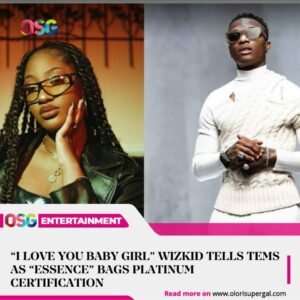 The song reached platinum status barely a month after it was certified gold in the US.

According to the BRITS Certified Awards website, songs are awarded platinum status when they achieve 600,000 units of sales. The records are awarded the gold status for 400,000 units and silver for 200,000 units, but this would be based on Official Charts Company data.

Tems’ manager, Muyiwa Awoniyi, shared a video on his Instagram story, where Tems and Wizkid were receiving the certification plaque. This comes after the duo performed “Essence” together for the first time on stage in the United States.

He also said, “We have a Platinum record and I just want to say thank you to everyone involved in this from Tems to the producers, Legendary beats, these are my brothers from way back. I want to say we made a good beat.

“Thanks to the whole team for believing in the dreams from early, to my fans I appreciate you all and I pray God blesses all of you”.

Essence becomes Wizkid’s second song to be certified this year after his 2017 song, “Come Closer”, featuring Canadian rapper, Drake, was certified platinum and gold in the UK and Australia respectively in April.

In 2020, Wizkid became the first African artiste to be certified Gold in the United States, after 500,000 units of Come Closer were sold.

“Essence” was released in October 2020 as the 11th song on Made in Lagos, Wizkid’s fourth studio album.

Drawing the attention of American stars such as Snoop Dogg and Kylie Jenner, “Essence” became popular with the American audience earlier this year.

The remixed version of the song featured Canadian pop star, Justin Bieber, who tagged it as, ‘song of the summer.’