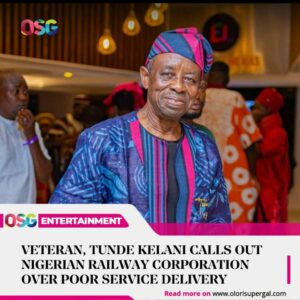 In a post on his Instagram page, Kelani shares his ordeal and laments bitterly that on a National holiday, the management could have anticipated the high turnout of passengers and put an operational plan in place.

He said that at 6 am, on Friday morning, when long queues have been formed, no staff of NRC had arrived, and the doors of the ticketing office were shut.

He further noted that after the arrival of the NRC staff, they struggled to manage the crowds which resulted in a stampede. Passengers were also faced with payment challenges.

“The NRC operating the new SGR could have been more efficient this morning at the Yaba terminal with advance planning.

“On a National holiday, October 1, the high turnout of passengers could have been anticipated and an appropriate operational plan put in place.

“At 6 am, when long queues have been formed, no staff of NRC has arrived! The doors of the ticketing office remained shut.

“More passengers were arriving at 6:45 when the door was finally thrown open with NRC staff struggling to manage the ensuing chaos. ‘Abeokuta this way’, ‘Ibadan that way only resulted in a stampede to get to the front of the line.

“Finding out too late, reports, no first class service on this train. Another queque has developed to get to the cubicle.

“No POS payment, you have to provide cash, counted one by one, by the ticket salesperson. A dozen biro or ballpoints scribbling on tiny tickets with a proof of identity etc. etc.

“Frankly, I think China’s CCECC has delivered or will deliver when the project is complete and handed over. But is NRC is ready? The new system cannot be allowed to run as an extension of the old NRC.

“Should China take over the commercial management or should it be contracted to Nigerian firms who can deliver efficient and enjoyable service?

“This morning, the EBJ/Yaba terminal of Mobolaji Johnson Station was no better than the Oshodi or any of our township motor parks. SHAME!

Kelani also referred to as TK is also a storyteller, director, photographer, cinematographer, and producer.

He specialises in producing movies that promote Nigeria’s cultural heritage and have a root in documentation, archiving, education, entertainment, and promotion of the culture.