Kelechi Out Of Europa League Match Due To Travel Documents Issues

Kelechi Out Of Europa League Match Due To Travel Documents Issues 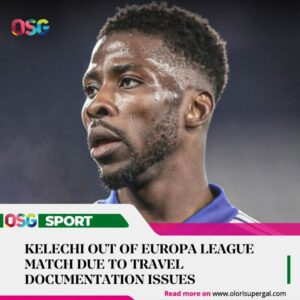 Super Eagles star, Kelechi Iheanacho will be forced to miss Leicester City’s Europa League clash against Legia Warsaw on Thursday, 30th September after being stopped at the Polish border.

Iheanacho was denied entry to the country after Polish authorities noticed a discrepancy in the details on his paperwork when compared alongside his passport.

He was detained at Warsaw’s Airport and will not play part in Thursday’s fixture.

Leicester City Manager, Brendan Rodgers confirmed the news, telling reporters: “We’ve had an issue with Kelechi so his documentation coming into the country wouldn’t suffice.

“The paperwork didn’t allow him to enter the country, which is unfortunate. We’ll have to look at that when we get back.”

Iheanacho is now set to return to the UK after club officials discussed with the Polish authorities the best way to secure his safe passage back.

The wrangle over his documentation is in no way related to Covid.

Rodgers will now have to do without the 24-year-old and it will come as a blow to Iheanacho too, given his only starts so far this season have been in the cup competitions.

Iheanacho’s compatriot Wilfried Ndidi is also absent for Leicester due to suspension, after he was sent off against Napoli.

Also, defender Jonny Evans will miss the tie after being struck down by illness.

Leicester drew 2-2 in their first match of this season’s competition with Napoli while Legia Warsaw currently top Group C after an opening win over Spartak Moscow.

NCC – Nigerians Without NIN Won’t Get ...