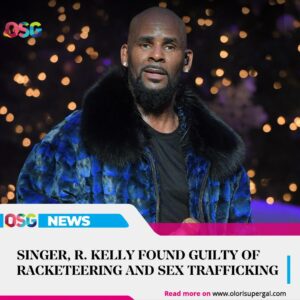 American singer, Robert Sylvester Kelly, better known as R. Kelly was on Monday, convicted of leading a decades-long sex crime ring, with a New York jury finding the superstar singer guilty on all nine charges, including the most serious of racketeering.

After six weeks of disturbing testimony during his trial from eleven accusers, nine women and two men, to describe sexual humiliation and violence at his hands, the jury deliberated just nine hours before finding the incarcerated 54-year-old celebrity guilty of systematically recruiting women and teenagers for sex, before grooming and brutally abusing them.

The verdict comes 13 years after Kelly was acquitted of child pornography charges after a trial in the state of Illinois.

Many of the allegations heard in the trial were first laid out in the 2019 documentary Surviving R Kelly.

He faces up to life in prison. His sentencing is scheduled for 4th May 2022.
To convict Kelly on the most serious charge of racketeering, jurors had to find him guilty of at least two of 14 “predicate acts” — the crimes elemental to the wider pattern of illegal wrongdoing.

The jury of five women and seven men found that all but two of the acts had been proven.
Kelly was also convicted on all eight charges of violating the Mann Act, an anti-sex trafficking law.

“We’re disappointed with the verdict,” Kelly’s attorney Deveraux Cannick told journalists outside the courtroom. He said they would be “considering” an appeal.

The singer – most famous for the award-winning song “I Believe I Can Fly” was also found to have trafficked women between different US states.