Federal Government To Seek UNESCO Recognition For Festivals In Nigeria

Federal Government To Seek UNESCO Recognition For Festivals In Nigeria 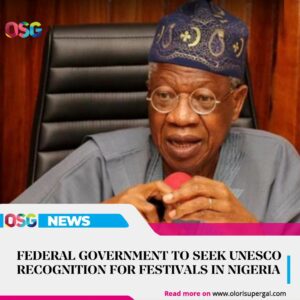 The Federal Government has said it would seek the United Nations Educational, Scientific and Cultural Organisation’s recognition for more cultural festivals in the country.

It added that this is to complement the inscription of Argungu Festival as cultural heritage by UNESCO.

The Minister of Information and Culture, Lai Mohammed, was quoted to have said this after he was turbaned as the ‘Kakakin Kabi’ (Cultural Ambassador and Emirate spokesman) by the Argungu Emirate Council in Kebbi State.

In a statement titled ‘Minister vows to seek recognition for more Nigerian festivals’ by the Special Assistant, Media, Office of the Minister of Information and Culture, Segun Adeyemi, the minister said,

“Kebbi State today is one of the frontline cultural and tourism states in the whole country.

“I say this not because I am being turbaned as ‘Kakakin Kabi’ but because of the reality. Each of the four Emirates that constitute the Kebbi Kingdom actually has unique and sellable tourism products.

“I start with Argungu. The Argungu International Fishing and Cultural Festival is known not just in Nigeria but all over the world and I am proud to say that it’s one of the few that have been inscribed on the list of intangible heritage of UNESCO.”

He said while the Gwandu Emirate showcases the annual Hotungu cultural festival of thanksgiving by the Fulani for the safe return of their cattle after the farming season, the Yauri Emirate boasts of the Boat Regatta while the Zuru Emirate owns the Uhola Festival to celebrate the bumper harvest and showcase different farming tools and implement.

In his remarks, the Emir of Argungu, Muhammed Mera, said the Emirate conferred the title of ‘Kakakin Kabi’ on the minister in appreciation of his efforts in promoting the Argungu Fishing Festival to a world Heritage status as well as his unflinching loyalty, courage, and strength of character in the discharge of his duties.