BBNAIJA 2021: Ex-housemate Yousef Says Angel Is A Cruise Master And Will Leave Him In The Bottom Of The Ocean

BBNAIJA 2021: Ex-housemate Yousef Says Angel Is A Cruise Master And Will Leave Him In The Bottom Of The Ocean 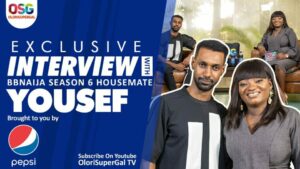 In his interview with Sergeant Olori, Yousef who has been pointed as the quietest housemate in the reality TV show history said he is a naturally quiet person.

Speaking about the fight between Boma and Angel, he said he is a very observant person and he noticed Angel has a deep history and Boma is always flirting.
He said Boma was able to trigger Angel because of her past.

Talking about how he felt when his first set of friends Niyi and Yerins got evicted, Yousef said he felt they will be fine, however, he felt bad for Yerins “he is a very intelligent person”. He also described Yerins as an introvert. For Niyi, he is a very confident man and he can handle himself

Having stayed in the house for eight weeks and been an underdog for season 6 of the show, Yousef said when he saw that housemates get to nominate each other for eviction, he decided to show the best side of him which is true love. He said he felt housemates knew how genuine he was and they had nothing bad to say about him.

Talking about how he didn’t get into any fights or relationships in the house, he said he likes to take his time. Asked about his affection towards Saskay and how she friend-zoned him, he said he felt really hurt at a point, he also felt she probably didn’t like him in the aspect of a relationship.

Speaking about the invitation he received from WhiteMoney into the executive lounge for a movie reward, Yousef said he felt WhiteMoney saw that he needed it because he was up for eviction and emotional and because he knew that he loved movies.

Asked about his friendship with Pere, he said it is an honest friendship. He said he wants to go into acting and pere being a good actor is a force to reckon with. He said Pere is an emotional and accomodating person.

Sergeant Olori revealed to Yousef that his discussion with Pere about his attraction to Angel was later discussed between Cross and Pere. Yousef admitted to not been aware of that but still thinks pere is good, unlike Saga.

Talking about his feelings for Angel, he said she is a cruise master and would leave him at the bottom of the ocean and his heart is not ready to take that.

Yousef named his fish Nemo because of an animation movie titled “finding Nemo”. He said he was able to bond with it and likes to say words from his heart which the fish listens to.

He named Peace, Jackie B, Nini, Angel, Maria, and Beatrice as his top six female crushes in the house.

Harriet Tubman – Conductor Of The Underground ...