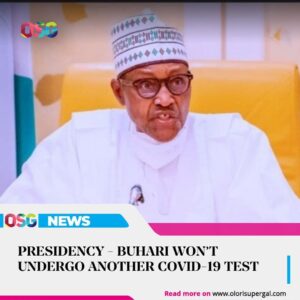 The Presidency has said there will be no need for President Muhammadu Buhari to have another COVID-19 test, as long as there was no contact between him and the Brazilian Health Minister, Marcelo Queiroga, who tested positive for the virus at the ongoing United Nations General Assembly.

It was earlier on Tuesday that Queiroga tested positive for the virus after attending the UNGA in New York that was inaugurated by his President, Jair Bolsonaro, according to an official statement.

Queiroga, who had received a COVID-19 vaccine, was the second member of the Brazilian delegation to test positive for the virus since arriving in New York for the UN gathering.

The 55-year-old health minister will quarantine in the US even as the rest of the delegation has returned to Brazil.

A source from the presidency said that the recent developments have nothing to do with Buhari and will not require additional tests on the President, especially when there was no known contact between both leaders.

President Buhari – My Government Doing Its ...