BBNAIJA 2021: Ex-housemate Saskay – “I Can’t Rate My Feelings For Cross”

BBNAIJA 2021: Ex-housemate Saskay – “I Can’t Rate My Feelings For Cross” 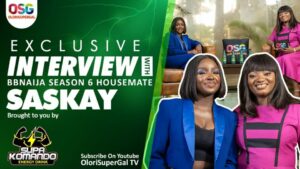 Tsakute Jonah was the sixteenth housemate evicted during the live eviction show of Big Brother Naija season 6 on 19th September 2021.

In her interview with Sergeant Olori, Saskay who spent eight weeks in Biggie’s house talked about how things are different in the house. She said, “it’s nothing like you would imagine”. She said she enjoyed her stay, she met with people from different aspects of life, different backgrounds, and “it was worth it”.

Talking about the ships in the house, she said what she had with JayPaul was not cruising, there were feelings but they were not an item. She noted that they were just friends and agreed to keep it that way.

Sergeant Olori recalled the conversation Saskay had with Peace in the house where she was told to just catch a cruise with Cross and JayPaul.
Responding, Saskay said she doesn’t like playing with people’s feelings because she would not want it in return. She said she took Peace advice in a different way; she decided to be aware of their feelings and make them understand that she didn’t want any situationship in the house.

When asked to rate her feelings for Cross on a scale of one to ten, Saskay said she can’t rate it.

Speaking on why Cross didn’t get close to her after JayPaul’s eviction, she said they both agreed that whatever feelings they have for each other, they are leaving it outside the house. She noted that after the house, if there are no feelings, they are fine and the friendship continues.

Talking about the relationship she had with the fish Biggie gave her, She said she had the fish for two weeks. She also said she didn’t bond with the fish in the first week because she was scared of been evicted and it would have been hard for her. After she was saved, she decided to bond with it.

She said it’s the first pet she has ever had and she named it Teca, meaning destiny’s friend because she saw the fish as a friend with listening ears.

Having won the Supa Komando task in the house, she said she was scared but WhiteMoney encouraged her. She said winning the task was Supa for her.

Speaking about the businesses she wants to venture into, she said she thinks of it as an empire it will consist of music, dance, and art. She said it will coexist in a way to uplift people who fall in the category.

Been among the top three richest housemates at the point of her eviction, she said she felt good because she put a lot of effort into the tasks at the same time, she felt somehow because housemates kept asking how she was always winning.

Asked about her strategy and how she seemed non-challant about the way she related with Cross and JayPaul, leading one on while telling one to Ignore the other. She said there was no strategy on how she dealt with the situation. She said the most important thing is that she recognized both their feelings and she explained to them about not wanting to be in a situationship. However, she also did not want them to feel bad about how they felt about her, she had to keep the friendship but it was hard.

Talking about the surprise bouquet she received from JayPaul, she said “it felt really nice honestly” because she kept saying she has never received flowers from the opposite gender.

She also said she didn’t think buying the flowers was a smart move because it was a lot of money to pay to make her happy. She said her reaction was a little bit harsh but he could have waited till after the house to buy it.

Talking about who she sees winning the show, she said personally she would have loved to see angel win but based on the three finalists, she doesn’t know.

Interesting and loaded! An energized moment with Sergeant Olori and Saskay, the queen of Supa Komando Energy Drink.

Don’t miss out! Click and subscribe on the youTube link below to watch the interview on OlORISUPERGAL TV, brought to you by Supa Komando Energy Drink.