BBNAIJA 2021: Ex-housemate KayVee Says He Felt Bad Because Of The Fight Between Sammy And Angel

BBNAIJA 2021: Ex-housemate KayVee Says He Felt Bad Because Of The Fight Between Sammy And Angel 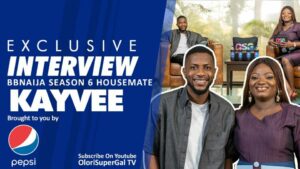 Ololade Gbolahan better known as KayVee is the first housemate to be withdrawn voluntarily from the Big Brother Naija reality TV show.

He came into the house as the third set of housemates introduced on the first live eviction show on 8th August 2021.

In his interview with Sergeant Olori, Kayvee talked about his immediate connection with Michael in the house. He said this happened because they were introduced together and people in the house already clicked as friends and couples.

Talking about the flirting moments between himself and peace, he said he likes her kind of person and her energy. He connected with her because they share the same mindset “free-minded”.

Asked about how he felt the night he was officially welcomed into the house with the truth or dare game and Angel picked him for the task, he said he was confused about her choice but he reciprocated when it was his turn to play the game.

This however led to a major fight in the house. He said it wasn’t his fault because he didn’t know what was going on. He also said he felt horrible because he had not started his game and a fight broke out because of him.

He further said after the fight, he noticed Angel was acting up because of the things Sammie said to her and he had to go close to her, talk to her and she came back to her normal self.

Speaking about the possibility of having a ship with Angel if he was still in the house, KayVee said it could have happened because they had matured conversations but he had to step back when he saw she already had a ship with Sammy.

Asked about who he connected with most in the house, he said he can’t mention one person because he didn’t spend much time getting to know them better. However, he said he enjoyed his time and had a conversation with everyone in the house except for Maria.

Taking about enjoyment, he picked the Saturday night party over the Friday night jacuzzi because it felt like he was in the club.

Speaking about the video that was played to the housemates after his exit on the show, KayVee said their emotional reaction made him understand they were worried about him. He said it made him happy that he actually made friends and family in the house.

Asked if he could put his bank balance as a bet on a housemate to win the show, who would his money be on and why? He mentioned Liquorose; noting that she is a strong team player, has good emotion, and has strong energy. He also said she is very competitive.

Speaking about his plans outside the house, KayVee said he would focus on his brand.

Responding to a fan who asked if he is attracted to Saskay romantically, he said “that one is going to cause wahala o”. He said he figured out they are going to be good friends outside the house. They had a couple of conversations in the house and he likes her kind of person.

He said he doesn’t think he is attracted to her romantically because she is inclined to JayPaul and he doesn’t want to ruin anybody’s ship. He noted that Saskay is a nice lady.

KayVee enjoyed his time on OlORISUPERGAL TV while he reminisced his time in Biggie’s house with a bottle of cold iced Pepsi. Grab a bottle today!