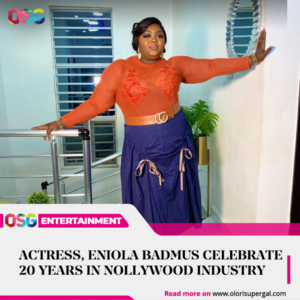 Nollywood actress, Eniola Badmus, also known as gbogbo big girlz, has taken to social media to shower praises on herself as she celebrates 20 years in the Nollywood industry.

In a post shared on her Instagram page, the actress said she is a big deal and first among those to reckon with in the industry.

She also said she is still bagging several awards and attributed her success to God. She noted that she would be celebrating the milestone with a book launch in December.

She further requested that her fans, families, admirer, haters, and everyone be at the celebration’s grand finale.

“I’m a big deal……..20years on stage and we are still bagging awards and still among the 1st to reckon with……It can only be you O Lord.

“Wait on it……request for your invite if you love me because all my friends, Families, Admirers, haters, Soulmates, friends with benefits, Chairmen, Chair ladies, Dignitaries, Godfada’s,
Godmothers, My Current and my Exes are coming so let’s have fun”.