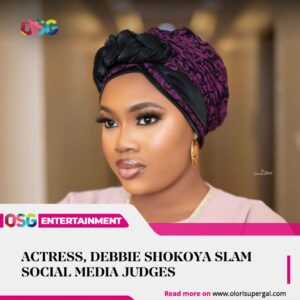 Nollywood actress, Deborah Shokoya better known as Debbie Shokoya, took to her Instagram page to attack people who judge others on social media.

Debbie who is also an entrepreneur posted a template on her page and noted that what works for one person might not work for another so people should stop being a soothsayer and stop judging.

Her template reads, “What works for “A” might not work for “B”. If them wan flaunt relationship for social media, allow them pls!! Not everyone wants to flaunt too, allow that pls!!

“Me I just love “Me & My Boo” Things!! If I decide to change from being private about my relationship life tomorrow, allow it!!

“Enough of these judging like you are a soothsayer”.

In her caption, she said she is sure she just spoke some people’s minds. She further called on Instagram pastors and others to allow people to be themselves.

She said it is a world where people use other people’s flaws to console themselves.

Read her caption below;

“[I Guess I Just Spoke Some People’s Mind Clearly]

“What Gives People Joy, Shouldn’t Be Judged By Someone Who Just Sit Somewhere To Criticize

Welcome To The World Where People Use Other People’s Flaws To Console Themselves.

“How Did We Even Start Turning Ourselves To God!! Or Allowing Social Media Control Things!! It’s Just An App Ooo!! I Just Hope You Remember”.