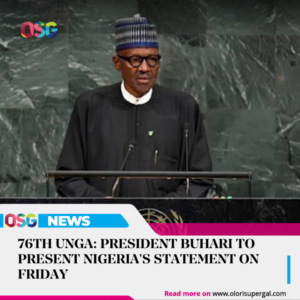 President Muhammadu Buhari will present Nigeria’s statement to the 76th Session of the UN General Assembly on Friday, 24th September 2021.

The president who arrived in New York on Sunday, 19th September, would be the second speaker on the fourth day and would deliver his address around 2 p.m. Nigerian time to other world leaders at the morning session.
He had earlier attended the opening of the General Debate of the 76th session of the General Assembly.

Buhari was accompanied by the Minister of Foreign Affairs, Geoffrey Onyeama, Permanent Representative of Nigeria to the UN, Prof. Tijjani Muhammad-Bande, and Head of Chancery of the Permanent Mission, Muyiwa Onifade.
No fewer than 100 heads of state attended the General Debate in person in New York, while others spoke through pre-recorded videos, the UN correspondent of the News Agency of Nigeria reports.